Multiplex “Dolly BellâÂ Â was officially opened on the 05th October 2012 in AndriÄgrad.

Following the modern age and adaptation of the film industry to present digital devices, we have built three cinema halls which are equipped with state of the art digital projectors, digital images and high-end stereo – surround sound systems (Dolby Digital system).

At the cinemaâs repertoire are movies of the world’s leading companies, independent and local productions.

Regarding actuality (world premiers, premiers with actors), quality (movies for audience of all ages) we are at the same level as the most developed world centres.

Other objects from our offer 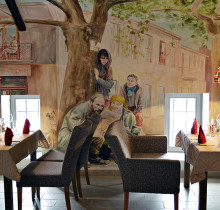 At a ceremony on the 26th of January, in the complex of AndriÄgrad, in ViĹĄegrad, was opened a new, representative restaurant âZlatna Morunaâ (Golden Sturgeon), thus catering...

Tourist Complex AndriÄgrad has 65 rooms and 8 suites (158 beds). Rooms are comfortable, air-conditioned, each room has a bathroom and free wireless internet. Most of the rooms have...