Promotion of a war diary “Smena” 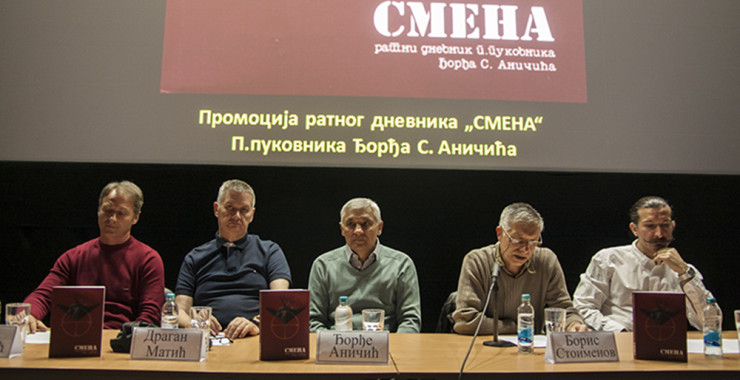 In the cinema “Dolly Bell” in AndriÄgrad tonight was promoted a book by retired Lieutenant Colonel ÄorÄe AniÄiÄ titled “Smena”, which represents his war diary at the time of the NATO aggression against Serbia.

In this book-diary by AniÄiÄ, who in 1999 was deputy commander of the Third Battalion of Air Defense /AD/, is about the daily life of his unit that was using the Russian missile system shot down an American bomber “F-117″, the so-called âInvisibleâ.

“The book follows the war path of the third missile battalion and my thoughts, combat actions, feelings, that feeling when you are introduced to war with the most powerful countries in the world, left alone without any allies. This is a realistic record of rocket station,” said AniÄiÄ.

“I couldnât believe that the war started, because we are part of the family of European nations, then we realized that we have to learn to war. We realized all the power at the disposal of the opponent and we searched the technical and tactical procedures and actions that may give us a way to survive,” added AniÄiÄ.

Stating that the book has historical significance, AniÄiÄ said that the holder of the AD in the defense of Belgrade was the Third Rocket Division, who fought all the 78 days of NATO bombing.

According to him, this is the only division that did not have losses in people and technology, which moved more than 100,000 kilometers.

“My greatest contribution, and most important for the unit, for sure is the way and the length of combat operation and manner of use of imitators radiation during a combat operation. I found a system solution for the HARM missiles,” said AniÄiÄ.

AniÄiÄ said that the book had been so far repeatedly promoted – in Serbia, Russia, Montenegro, Romania and Bosnia.

During the promotion in AndriÄgrad was shown a clip from the documentary “Duh iz Srema”, which captures the motifs from the book.

Film director Nemanja Jovanov said that the film “Duh iz Srema” is in the process of making, and that the idea came according to the motives of the war diary “Smena”.

“When I read the book I thought about how to send this message to people. I decided to get in touch with the author and so we decided to work together on this film,” said Jovanov.

He said that the film is being made by a team of young people, whose aim is to present this film to the public as a very important project, which will tell the story of a hero who defended the 78 days of the demonic enemy – NATO and managed to find a solution on how to be an equal with the plane.

Jovanov added that they have to justify the fact that they shot down three planes that were never affected, but survived the war without casualties.