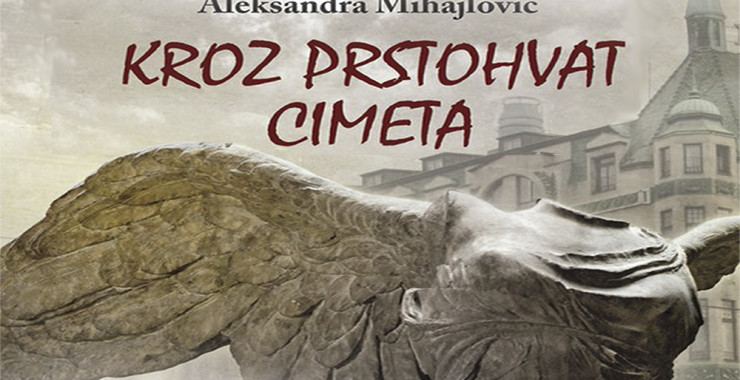 AndriÄgrad invites You to the promotion of the novel “Through the Pinch of Cinnamon” by Aleksandra MihajloviÄ, which will be held in the book shop “Ili-Ili” on the ninth of January 2016, starting at 6 pm. Besides the author at the book promotion will be Vanja JekiÄ and Ljiljana Ĺ op.

The second novel of a writer from PanÄevo, Aleksandra MihajloviÄ, “Through a Pinch of Cinnamon,” had been published just before the 60th International Book Fair in Belgrade.

The book has two threads – historical and contemporary, which with letters of cinnamon colour connects Queen Natalija ObrenoviÄ, wife of Milan and mother of Aleksandar ObrenoviÄ.

One of the contemporary characters is Veles PetronijeviÄ. Docent at the department of aesthetics at the Faculty of Philosophy, mesmerized by the beauty that is often an excuse for seduction, but also with Soren Kierkegaard and his philosophy of human existence. Veles is a passionate student of history, especially of the ObrenoviÄ dynasty, namely the life of the unfortunate Queen Natalija.

Another modern character is Velesâ twin sister, Vesna. She is his face, the most sacred and the brightest. Despite her spirituality and dedication, marriage, from her point of view, is primarily emotional community, and she loves her husband completely with undeserved love. Great love between brother and sister undermines their very opposite attitude toward understanding responsibility.

The third modern character is Itana. She is passionately searching for the murderer of his twin sister Vedrana, who, working on a doctorate in psychology, investigated the chain of elite prostitution in Belgrade.

The names of the heroes are deliberately, mostly taken from the Slovenian mythology, respecting the principle “Nomen est omen” or “name denotes the character”.

Aleksandra MihajloviÄ is the first Serbian writer who dealt with the issues such as prostitution, on philosophical and historical way of life and the twins. Ljiljana Ĺ op, in his review of the novel, wrote: “The plot worthy of a crime novel, although this novel, in its essence, is not. But it is one of its themes – a subject that is almost taboo in contemporary Serbian literature, although annoys even in the tabloid press and on social networks.”