The premiere of the documentary film “You go, I will not!” 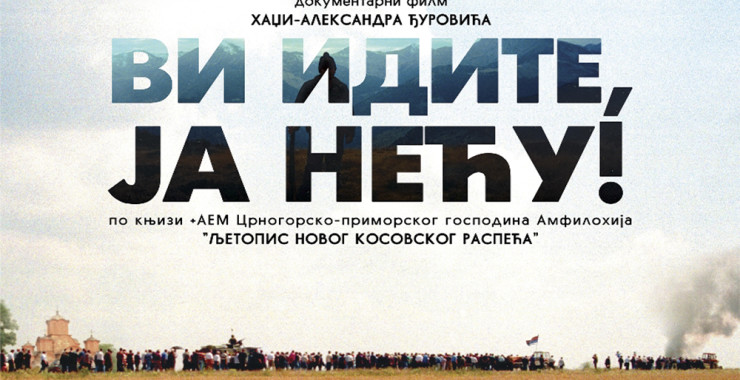 Documentary film, “You go, I will not!“, directed by Aleksandra ÄuroviÄ, will be shown on January 21, 2016 at 8 pm in the great hall of multiplex “Dolly Bell” in AndriÄgrad. The entrance is free of charge!

The film is based on a book, “The Chronicles of the New Kosovo Crucifixion“, by Metropolitan Amfilohije and is about longtime suffering of Serbian people, their religious and cultural heritage on the territory of Kosovo and Metohija, with special emphasis on the years 1999 and 2004 as well as the family drama of missing MiloĹĄ ÄirkoviÄ.

The film is supported by His Holiness Serbian Patriarch Irinej and Serbian Orthodox Church, as well as the City of Belgrade – Secretariat for Culture. The film is also part of the campaign “No Kosovo in UNESCO“. Made its debut on June 28, in Podgorica and Herceg Novi, and in Belgrade 29.10. closed premiere. Open screening at the Children’s Cultural Centre of Belgrade with the support of the Cabinet of the President of the Republic, and there are plans and projections at the Russian House.

Young cameraman, screenwriter, editor, composer and director ÄuroviÄ, who graduated 2010 at the Academy of Arts in Belgrade, where he now works as an assistant, points out that it is a great honor for him because Metropolitan Amfilohije decided that he films this story.

- The work on the film, which lasted about nine months, I’ve lived a fraction of suffering, and resurrection of our nation and its religion. It’s incredible story of the exploits of one man, but of the entire Serbian nation and the Orthodox Church, with faith and a desire to preserve the holy land of Kosovo and Metohija – he says.

He adds that we do not know a lot of things about the period 1998-1999. and that is why this film is important because victims deserve not to be forgotten.