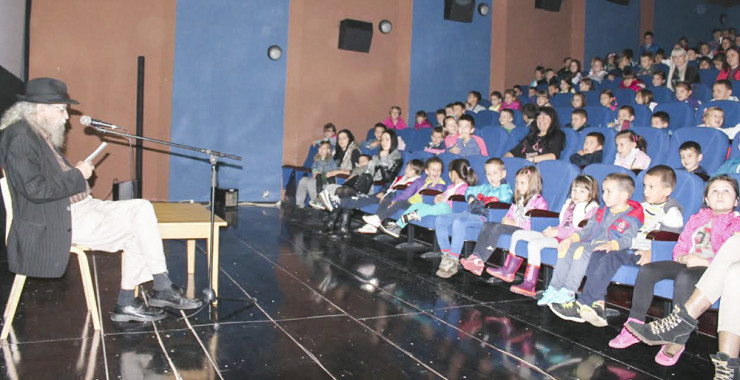 Radivoje “RaĹĄa” Popov, a children’s book author, a longtime television journalist, remembered as a star of a former television show for children “Tips & Tricks”, in a crowded hall of cinema “Dolly Bell” in AndriÄgrad entertained pupils of first and second grade of elementary school “Vuk KaradĹžiÄ” from ViĹĄegrad.

Famous RaĹĄa, with his performance showed remarkable vitality, read to kids his old and new humorous children’s songs, telling them all sorts of adventures and instructive stories and fairy tales.

He recalled the great popularity of children’s television show “Tips & Tricks”, which left a deep mark on many generations of the youngest around pre-war Yugoslavia.

âAfter 30 years from broadcasting this popular children’s shows, this year the creator, poet Ljubivoje RĹĄumoviÄ, brought us together again, after which the shooting the new series of “Tips and Tricks” started, and which montage is scheduled for this winter, and broadcast in the spring,â said Popov.

He told the youngsters to obey their parents, and to parents that they treat their children well and not to beat them.

âIt is the simple secret of family happiness,â said RaĹĄa Popov, after spending time with the children from ViĹĄegrad in AndriÄgrad, on the occasion of Children’s Week.