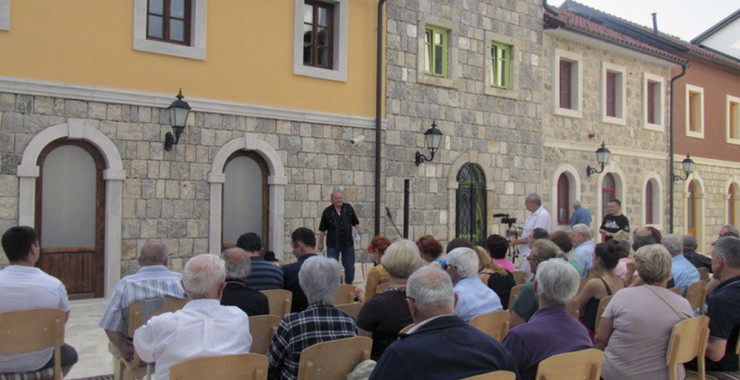 At the Byzantine Square in AndriÄgrad was held the final event of the first competition “Pjesme AndriÄgradu” ( Songs to AndriÄgrad) organized by the Literary Fund “Sveti Sava” from East Sarajevo.

Organizer of the event, Bozidar Ĺ kobiÄ said that was received over 170 songs, and in the book – a compilation “Pjesme AndriÄgradu” was included 50 songs.

“Eight poets were rewarded, although there were many good songs,” Ĺ kobiÄ said, adding that it is a great honor that AndriÄgrad supported poets and, with financial assistance, publish this compilation.

“This is a good beginning of a beautiful tradition, because in the competition took place poets from more than nine countries,” added Ĺ kobiÄ.

Poet Radomir JagodiÄ expressed gratitude for the awarded Charter and emphasized that he would continue to work for the benefit of Serbian people, as the very name of the Charter which was awarded to him.

Second prized poet, Ljiljana Fijat from Novi Sad, said that it was a great honor to write about AndriÄgrad, and this was also an opportunity to visit cities in Republic of Srpska.

“The fact that there is a possibility to come here was inspirational for me, I am thrilled with AndriÄgrad and the Bridge on the Drina,” said Fijat.

Manager of AndriÄgrad, ÄorÄije Ĺ ipÄiÄ, told to SRNA that this was one in a series of events dedicated to Ivo Andric and to his work.

“We are pleased that this event happened in AndriÄgrad and we hope that such poetic meetings will become traditional,” added Ĺ ipÄiÄ.

At this poetry reciting many of the participants of the competition recited their poems, and the organizers awarded prizes and awards to the best ones.