KUD “GraÄanica” from Chicago to AndriÄgrad: Protect from oblivion their language, tradition and culture 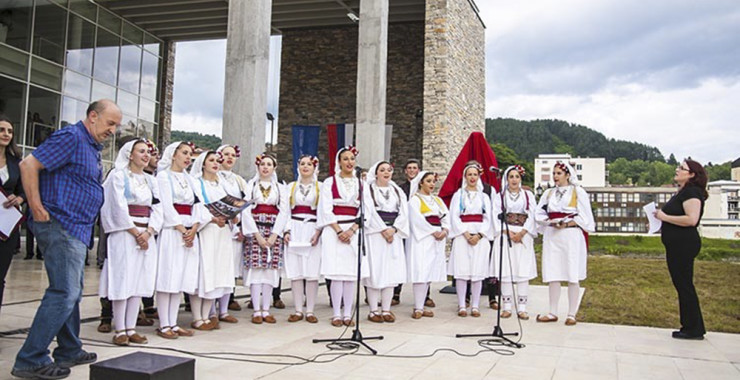 Vidovdan in ViĹĄegrad 2015 will be remembered for the unveiling of the monument to one of the greatest Serbian scientist and inventor, Nikola Tesla, in AndriÄgrad.

Besides Ivo AndriÄ, Petar PetroviÄ NjegoĹĄ and Tesla got a rightful place in this magical city of stone.

As Tesla deep inside hidden nostalgia for his homeland, while the biggest part of his life spent in America, and today the Serbs, who live in that country, kept from forgetting their language, tradition and culture.

In honor of Nikola Tesla and at the invitation of the host of AndriÄgrad, Emir Kusturica, on Vidovdan young members of the cultural association “GraÄanica” from Chicago with their performance have gladden all visitors and showed that “over there” they cherish their heritage and ancestry.

Delighting solemn moment of unveiling monument of our greatest scientist in front of the administrative building “HPP on the Drina”, played traditional Serbian dances from Kosovo, Ĺ umadija, Lika and Krajina and the most emotions in the audience evoked the choir singing “Serbian Marseillaise” TAMO DALEKO…

We asked this young boys and the girls how they succeed to be Serbs in America?

Dmitra KovaÄeviÄ: “My father was from Gacko and mother from Lika. The most important thing for me is to know Serbian language which I will convey to my children. The hardest for us is school, because there we must speak English. That’s why every year we come to Serbia and Republic of Srpska and is easier for us. Here we learn much more and enrich our vocabulary.”

Marko BiÄanin: “My mother is from Kraljevo and my father is from PeÄ, from Kosovo. We speak Serbian when we are at home and when we hang out with each other. We, Serbs, often mix Serbian and English, but mostly we talk more in our own language. Often we gather around the church, to socialize, learn our songs, play folklore. And when it is time to get married I will choose a Serbian girl.”

Sara StojkoviÄ: “My mother is from Slavonski Brod in Croatia and my father from Bosanski Brod in Republic of Srpske. Each year for school holidays I go there. I want to remain a Serb in America. I fight on different ways to preserve my national identity, my Orthodox religion. I go to church almost every Sunday with friends. The most important thing in my life is that I speak Serbian. When leaving my homeland always cry. Here is the most beautiful place.”

Happy, because they are in their homeland, they brought and charter of gratitude to the host of AndriÄgrad, Professor Emir Kusturica, which before the delivery with the deepest emotions had been read by Dmitra KovaÄeviÄ.

“Dear brothers and sisters, Serbian men and Serbian women! I have a great honor and joy to say hello and thank you for your hospitality, attention and love,Â  on behalf of folklore group “GraÄanica” from Chicago and on behalf of parents and children and all who gather around the Serbian Orthodox Church and especially in the Nova GraÄanica Monastery.

Our joy is greater because we have met today at the big holiday of Vidovdan, remembering long-ago event when Serbs met and showed their eternal commitment to God and to Christ. They showed, as the poet says, that in the Serbian people will happen gospel. They showed that today’s holiday appointed Serbian history and that have determined present and future. KUD “GraÄanica” operates around 40 years while preserving the most precious treasure that adorns the Serbian people. Playing, singing in folk costumes from all Serbian countries in which is the woven tear of JugoviÄsâ mother, Kosovar girls and young Milica, we are witnessing and confess St. Sava, Kosovo vow is the only time of our nation. Happy holiday dear brothers and sisters! “

Instructor of folklorists, Dragan KaradĹžiÄ-Ĺ˝drale, born in ÄajniÄe says that passing through Serbia, Republic of Srpska and Montenegro, the young ones are visiting ancient monasteries, churches and museums, and thus become familiar with the most loyal guardians of orthodoxy.

Special honor for them was their participation at the celebrations of Vidovdan in AndriÄgrad.

“The children had a great porch. They have experienced the arrival to Republic of Srpska with special emotions because in America from their parents they have heard a lot of about everything that was happening here in the recent past and what people survived. AndriÄgrad for them is something to important in which they must not embarrass themselves, to forget the lyrics during the performance before the audience. They see this performance as a great responsibility, and here, they showed that they could perform along with children from these parts,” said Dragana.

It highlights the great sacrifice of their parents who are trying to preserve their descendants national identity through the preservation of Serbian language and the cultivation of traditional customs. “They travel for 80 kilometers one way to practice folklor.They do that because of their great desire to inculcate the children it is very important to know who they are and whom they belong? There are so many talented children which arrive by themselves to the rehearsals which are held once a week and only as long as the school ,” said Ĺ˝drale.

With KUD “GraÄanica” arrived and Aleksandar Ĺ˝igiÄ, journalist and editor of Radio Avala in Chicago and “Serbian Postcards from America,” which is broadcast on satellite channel RTS. Delighted with natural beauty of Zlatibor, Mokra Gora and ViĹĄegrad, he says that his next reportage will start from AndriÄgrad which will watch Serbs in Chicago. “In this area of America has about 300,000 Serbs. It will be my pleasure to convey all impressions from this area because our people there pulling strong nostalgia for the motherland,” said Ĺ˝igiÄ and pointing out that the children had the opportunity to go on an excursion to Florida or Hawaii but not, they wished to visit Serbia.