Dodik: AndriÄgrad is becoming the capital of the culture 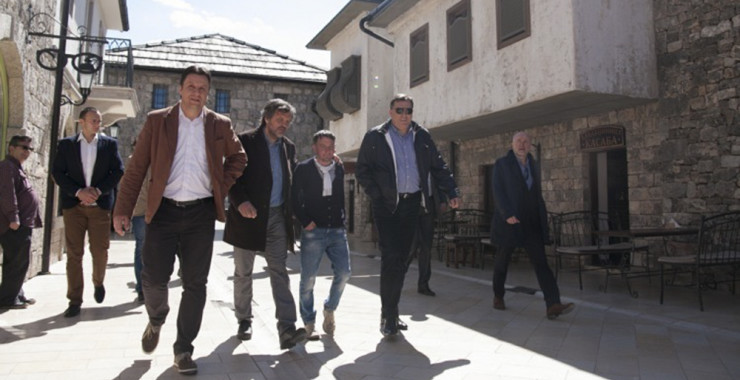 The President of Republic of Srpska, Milorad Dodik, has said today that AndriÄgrad is becoming the capital of culture in Republic of Srpska and points out that people should gather round these projects and to support them.

“And through the realization of the Faculty of Arts, here will be seen how this has been the far-reaching idea when we in an informal conversation supported the idea of AndriÄgrad,” says Dodik, after a tour through AndriÄgrad with the director of the AndriÄ Institute, Emir Kusturica, and director of AndriÄgrad, Pero PetroviÄ.

Dodik says that AndriÄgrad from the idea to realization went by the dynamics that Kusturica determined, which was very fast, impressive and surprising for many people, and that here here was achieved many victories.

“One of the most important is the one that speaks of those who from beginning have said that there this wonât be finished, and during the construction said a lot of bad things, but today they are silent, that is important and that silence I adore,” says Dodik.

He reminds that the Government of Republic of Srpska by the end of the year will fulfill earlier commitments, in order that cooperation project of AndriÄgrad and Venetian theater could be realized in the following year, which will even more draw attention to the significance of AndriÄgrad.

In the program of Venetian theater “La Fenice-Verdiana” will be opera “The Bridge on the Drina”. The premiere is scheduled for next year at the same time in Venice and AndriÄgrad.

Â ”AndriÄgrad lives with its life and this has already become a tradition, despite the fact that only a few years have passed since the construction of AndriÄgrad. I am always looking forward when I can arrive here and see something new,” says Dodik.

According to him, in AndriÄgrad there is always some new ideas that should be realized.

“The essence of life and development is that you should never stop,” points out Dodik and adds that it is necessary to have a developmental mental offensive, which says that life, if it is designed and if there are projects like this, makes sense, and that people need to gather round these projects and to support them because this is the part that will besides the bridge or together with it mark this entire region, and not just ViĹĄegrad.

Dodik says that it is everyoneâs satisfaction who can visit AndriÄgrad and to admire to what has been done here.