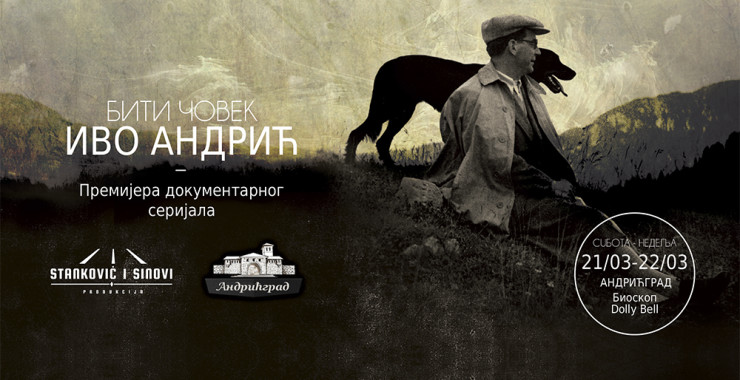 On the occasion of the 40th anniversary of the death of Serbian writer, a diplomat and a Nobel Prize winner, Ivo Andric, on Saturday 21 March 2015 at 8 pm in the great hall of cinema “Dolly Bell” will be held the promotion and screening of the documentary series “Biti Äovek – Ivo Andric” ( Being a human – Ivo AndriÄ ).

Author and producer of the series is Sonja Mihajlov, the director is Miljan GliĹĄiÄ, and these series were made from a screenplay by Danica PajoviÄ and Sonja Mihajlov and production company “StankoviÄ & sinovi”.

Also, the series is filmed at numerous locations in Belgrade – the city where the Nobel laureate longest lived, wrote some of his greatest works and which he loved the most, while the segments filmed in Krakow and Stockholm.

For the first time after more than half a century, a film crew from Serbia recorded in the Nobel committee in the famous rococo hall where a decision is made about the Nobel Prize for Literature, in the concert hall where the ceremony is being held in the Town Hall where the Swedish king and queen traditionally hold formal ball for this prestigious prize laureate.

Sonja Mihajlov, during the four episodes, leads us through the biography and creativity of the only Yugoslav Nobel Prize winner. Her numerous interlocutors have shed a new light on the private life, ideological orientation, diplomatic career and artistic models of the great writer, but also they define the socio-cultural and historical circumstances against which Ivo AndriÄ fought.

Childhood and youth of Ivo Andric was marked by his father’s death, separation from the mother, growing up in ViĹĄegrad and stature in Sarajevo. A little-known details of the formative years of Ivo AndriÄ about growing up of a rebellious poet whose wings was cut by the First World War.

AndriÄâs youth disappeared too soon, before the horrors of war and painful labor. More mature and cautious AndriÄ arrived in Belgrade with aura of a cursed young poet who began writing fiction. For the first time he was seen by the eyes of the woman who will never leave, even when he fell in love with other. By coincidence he entered into diplomacy, his literary reputation was growing rapidly. After that he was called by an influential secret society which only confirms AndriÄâs status at the cultural elite of the Kingdom of Serbia.

Ivo AndriÄ experiencing a fatal love and the most terrible war the world has ever seen. Life and writing under the German occupation and the bombs by the Alliance were less terrible than the ethical and moral dilemmas of a man who wanted to live only if he remained a human.

Ivo Andric as a bridge between the Kingdom of Serbia and the Socialist Federal Republic of Yugoslavia, suffered strokes on both coasts. But the river of his childhood taught him to tame the floods and AndriÄ managed to emerge stronger and shinier than ever. Finally experiencing the golden autumn of his turbulent life and career just, as he says, that “In an instant, everything mine have burnt”.

The series “Biti Äovek – Ivo AndriÄ” represents a fresh, human view of the less known side of our greatest writer.