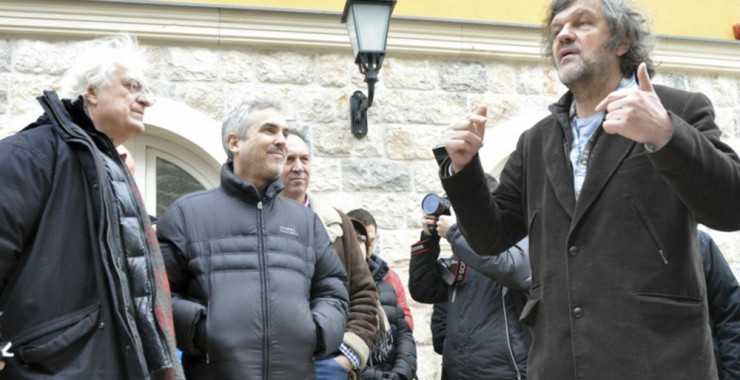 Kustendorf in AndriÄgrad. Guests of the festival, which is being held for the fourth day on MeÄavnik, visited AndriÄgrad where they were hosted by Emir Kusturica.

This is a large construction project, another proof that culture builds civilizations, not vice versa! – Said movie director, Alfonso CuarĂłn, having walked through the streets of the town.

I am fascinated by the fact that it is a great film maker made this architectural project – continued the creator of such hits as “Great Expectations”, “Y Tu MamĂĄ TambiĂŠn”, “Descendants”.

The guests were the most attracted to the mosaic with characters of Princip and members of Mlada Bosna.

We have marked the beginning of the First World War here, resisted the attempts of a revision of history that have come from Canada, Great Britain, USA … Members of Mlada Bosna were libertarian organization that with the murder of Franz Ferdinand released the last European slaves – Kusturica was explaining to CuarĂłn, Tavernier, Warwick Thornton.

Â Kusturica also reminded them of the story of Hitler, who asked that the board, which marked the place of the Assassination in Sarajevo, had to be brought in front of his feet.

Now we have made the mosaic here, the new fascists will hardly take it off – Kusturica said proudly.

Guests have learned that the entire town, which they have been sightseeing for nearly an hour, is built in just three years, and that stones, with which is built, are between 150 and 200 years oldâŚ

Walk of celebrities through AndriÄgrad finished with the opening of the restaurant “Zlatna moruna”. It was named after the restaurant in Belgrade, where members of Mlada Bosna were gathering âŚ

In the restaurant, Taverna, Cuaron and the other guests were waiting particular society, on the restaurant walls there is an imagination of the artist Bisenija TereĹĄÄenko … Obama looking at a shell game, at the other end of Putin, Kusturica, Tesla, MeĹĄa SelimoviÄ, Matija BeÄkoviÄ âŚ