Only grandchildren of Ustashas see genocide in AndriÄgrad 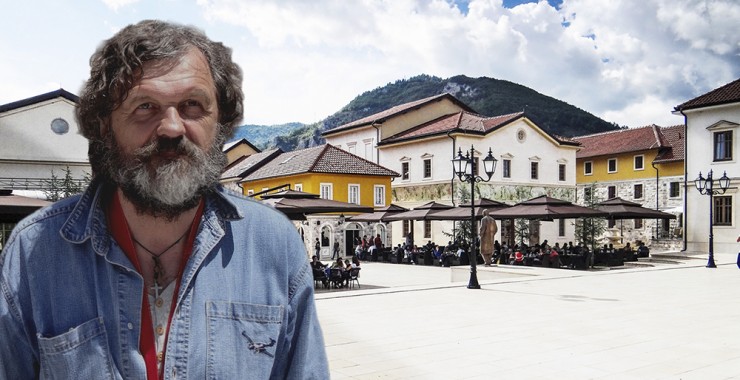 Director Emir Kusturica says that Bosniak intellectuals persistently strive to children of fighters against the Nazis “reform” into Fascists, and genocide in AndriÄgrad see only those whose ancestors fought for the Nazis in the squads of the Ustashas and the Handschar division.

“The loudest fighter against educational and cultural function of AndriÄgrad is morally insufficient Sidran / one Hegelian from Sarajevo calls him like that. Sidran does not document genocide of whom he speaks so often but he points it out as a general position, waving with it and degrades it as well as his own life,” writes Kusturica in an article published in Belgrade’s “Politika”.

Stating that “this spiritual homeless,” suggests that Republic of Srpska should be fenced as Auschwitz and that AndriÄgrad should be turned into a museum, Kusturica says that it would not be wise, “not only because it is well known how the National Museum in Sarajevo has been destroyed“.

Kusturica points out that Sidranâs suggestion would not be wise to realize “mostly because of vengeful rhetoric that has been going on for twenty years and that conjures up reality suggested by the title of the film by Ĺ˝ivojin PavloviÄ âSee you in the next war`”.

In an article entitled “When I have headed to Disneyland” Kusturica admits that he has not been stricken because of “a few persons, who are Bosniak elite” call AndriÄgrad Disneyland until he has discovered that they in the same context, “more often also mentioned genocide.“

“Bosniak intellectuals see the future better than me. They seemed to anticipate that Disneyland could soon enter a phase of reforms. In the same way as they reform states, they also want to reform us, children whose fathers fought against the Nazis,” says Kusturica.

He also points out that on the side of the Nazis on the Eastern Front were fighting “Ustashas and the Handschar division, whose grandchildren now in AndriÄgrad see genocide”.

“If we grant amnesty to soldiers of the Wehrmacht, will someone one day also accept the reformed Disneyland? It will be an advertising campaign for a brand already busted: `They were not bad soldiers, and they appeared to be very convincing. After all, they wore a helmet of the same shape as today’s NATO soldiers`” says Kusturica.

He points out that all depends of the situation on the ground. “Do Bosniak intellectuals believe that NATO will this time get to Siberia, and those 22 million Russians who died fighting in World War II against Nazis, Ustashas and the Handschar division, will posthumously be declared as the Nazis?” asks Kusturica.

If this happens, Kusturica asks if they believe that Hitler will be seen at Disneyland as a traffic cop that directs Goofy and Mickey Mouse and takes guests to show them rocks from Ohio and the place where the rest of Indians live.