Rowers of Romania absolute rulers of the Balkans 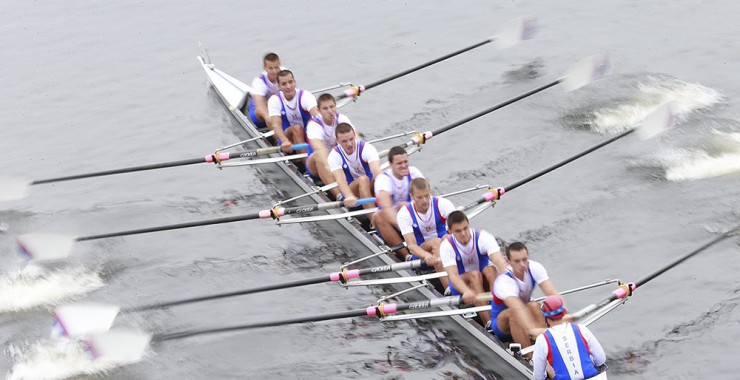 Romanian rowing team is overall winner of the Balkan Championship in ViĹĄegrad with 13 gold medals and it has also defended the title of the most successful selection from last year’s championship.

The first day they won nine medals, of which six were gold. Romanians on the final day of the competition were seven times decorated with the brightest medal and so with total of 18 medals took the first place in the overall placement.

Today’s program started with junior men’s single scull race, where Romanian Constantin Adam won (07: 56.21) ahead of competitors from Bulgaria and Turkey, and after them Greek junior men’s B four (Antonis, Vardakas, Nasios, Papadimitriou) won with a time 06:59,14, while Bulgarians took a silver medal took Bulgarians and Romanians a bronze medal.

In the next race, a new champions of Balkan in junior’s women’s B quadruple scull became Romanians (Sava, Rosu, Bodnar, Anghel) with time 07:24.48, leaving behind Greece and Bulgarians, and the dominance of the Romanians continued juniors men’s B pair, Tiganescu – Chiruta (07:37.40), leaving behind teams of Bulgaria and Greece.

In the junior men’s B quadruple scull race were the best rowers from Greece (Mpallis, Kalandaridis, ARMENIAKOS, Athanasiadis) with a score 06:38.33, only 66 hundredths faster than second-placed Romania, the third were Turks, and already in the next race Romanians returned favor to Greeks so in the junior women’s pair Georgiana Vasils and Georgiana Parascan (08:22,20) won the first place, the second were Greeks, and the third Bulgarians.

In the final of juniors women’s single scull race Sofia Asoumanaki (08: 38,59) won the first place, leaving behind Ljiljana JoĹĄiÄ, who today won the first medal for Serbia, and the third-placed Desislava Georgieva from Bulgaria. In the footsteps of his compatriot also went Miona MitroviÄ and Milica SlijepÄeviÄ winning the second medal in ViĹĄegrad. After winning a bronze in junior women’s B quadruple scull race, two of them won a bronze medal in the junior women’s double scull, and faster then them were junior world’s champions, Elena Logofatu and Nicoleta Pascanu from Romania (07: 49,97), while a silver medal won Greece crew.

In the junior men’s quadruple scull race, the same as during the whole this Balkan Championship Romanians (Birsan, Adam, Chioscana, Ilic) won with time (06:31.39), after them were crews from Greece and Serbia. In the final race of the Balkan Championship in Visegrad, Romanians (Grosen, Paval, Grandfather, Tudosa, Radu, Bejan, Mihaita, Macovici and abs Cristescu) won in junior man’s eight race, they crossed the path of 2,000 feet in a time of 06:01.97, ahead of the Serbian and Greek crews.

At the end, in AndriÄgrad was awarded medals to the best, and the new president of the Balkan Rowing Association, Izabala Lipa, five times Olympic champion, received the flag of the organization from the president of Rowing Federation of Bosnia and Herzegovina, NebojĹĄa MarkoviÄ and she wished welcomed all participants when the come next year on the championship in Romania.

Ranking list of Balkan Championship in ViĹĄegrad can be downloaded HERE