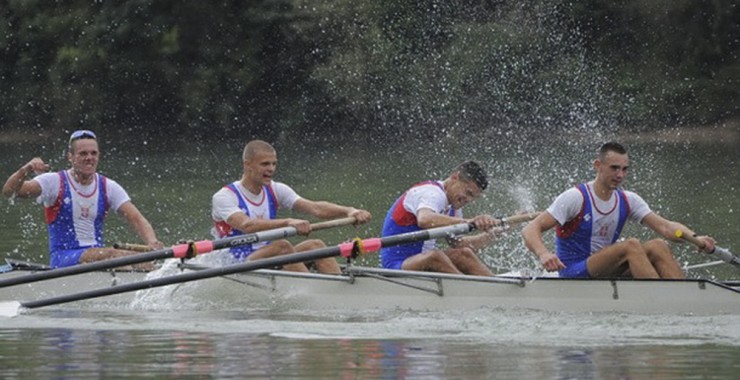 After the first day of the Balkan Rowing Championship in ViĹĄegrad, the most successful were rowers from Romania with a total of nine medals, followed by Bulgarians with five.

At the rowerâs path in the village of Sasa was held the first competition at the Balkan Championship, which for the first time was organized by Visegrad, Republic of Srpska and Bosnia and Herzegovina. Due to the low water level of the Drina River, it was decided to move the contestants one by one with a minute apart, so that all have equal opportunities.

In the first race, the women’s junior lightweight fours, Romanians (Petreanu, Mihai, Vasile, Parascan) won the gold medal with time 7:55,18, while the second place won Bulgarians with about a minute and a half behind.

New celebration for Romanians was brought by Cosmin Pascari (8:02,83) winning the junior single sculls, he was faster than Najdenov from Bulgaria and Vasilcios from Greece.

The first big celebration for the home fans was brought by a quadruple from Serbia (Zoran RajiÄ, Marko RistiÄ, DuĹĄan SlavniÄ and UroĹĄ DimitrijeviÄ), which also won the brightest medal with a time 6:34.89, second place went to the Greeks, and the third to Romanians.

After them was race of womenâs four, where Asoumanaki Sofia, Zerva Aikaterini, Giannou Paraskevi, Mamalou Dimitra won the first gold for Greece on this year’s Balkan Championships in junior quadruple with the time (7:19,34), they were faster than Romanian and Serbian selection.

Turkey’s first gold won the duo, Aslan and Guven (7:21,14), followed by the crew of Romania and Greece. It should be noted that in this race participated representatives of Bosnia and Herzegovina, Vladan NediÄ and Igor MiloĹĄeviÄ and took the fifth place.

After the women’s fours, a new gold medal went to selection of Greece, and was won by a tough pair, Stefanos and Ioannis, with time 6:57.76, the silver medal went to Turkey, and bronze to Serbia.

In the same way as they took three gold medals today in the first three disciplines, the contestants of Romania took and the last three. Firstly, Ancuta Bodnar in the final of single sculls won with a score of 8: 44.38, ahead of Bulgarians and Greeks, after a female duo of Sava and Anghel won with a time 7:56.30 and left behind Greece and Bulgaria.

Finally, the last discipline of the day was the men’s eights skippered and the gold went to Romanians (Catruna, Chelaru, Stout, Moglan, Berarie, Levaci, Tiganescu, Chiruta and coxswain Cristescu) with the time 6:24.20, Bulgaria won silver, and Greece won bronze.

After the race, contestants went toAndriÄgrad, where was held a ceremony of awarding medals, and the competition continues tomorrow at 10 oâclock.