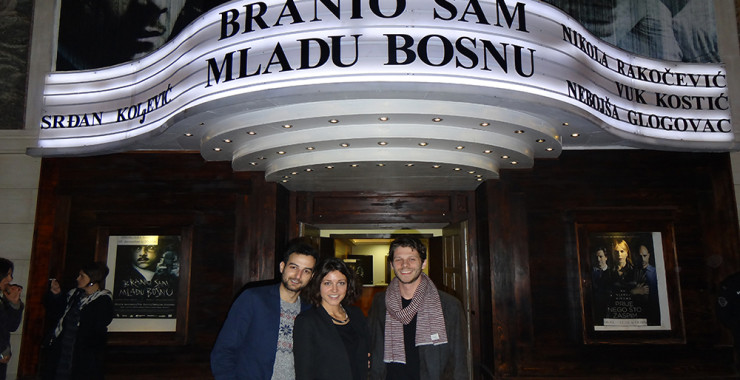 The only film project commemorating the 100th anniversary since the beginning of the First World War – “The Man Who Defended Gavrilo Princip”, by director and screenwriter SrÄan KoljeviÄ, has been presented at the cinema “Dolly Bell” in AndriÄgrad.

The famous Serbian film director, Emir Kusturica, said that this was the first time that the film “The Man Who Defended Gavrilo Princip” (Branio sam Mladu Bosnu) was played in Republic of Srpska, or in the eponymous street Mlada Bosna, pointing out that it is quite rare that street and film have the same name.

“Through this motion picture, SrÄan KoljeviÄâs actors have achieved a great role, especially because through the interpretation of the members of Mlada Bosna they brought sincere purity of enthusiasm and idealism, which is so important for this story,” said Kusturica.

He added that the precise and detailed reconstruction of the trial of Gavrilo Princip and members of Mlada Bosna, charged for treason and assassination, revealed many things, but above all the life story of an honorable lawyer Rudolf Zistler.

KoljeviÄ said that the film is the story about “Mlada Bosna” and the Assassination in Sarajevo from the perspective of Rudolf Zistler, who generously decided to defend the accused, putting himself in a danger to be lynched.

“That kind of courage is rare even today, that is why I thought it was important to tell this story,” said KoljeviÄ.

He expressed satisfaction that the audience recognized the universality of this story and that the young actors understood the essence of the idea of freedom with which this film deals.

“This film certainly would not have been made if there were no help by Emir Kusturica, in moments when no one was helping, Kusturica was there and this is the happy result that the audience appreciates,” said KoljeviÄ.

Vaja DujoviÄ said that this was her first role in the film and that she was very happy with the reaction of the audience.

“I’m very excited, especially because on a such a wonderful occasion I have arrived to ViĹĄegrad and AndriÄgrad. This is a unique opportunity to spend time with Emir Kusturica, who is a very nice host, “said DujoviÄ.

MiloĹĄ ÄuroviÄ, who in the film plays the role of Gavrilo Princip, said that he had a great responsibility of interpreting this historical figure.

“I decided to present Gavrilo Princip as I see it and to feel his yearning for freedom,” said ÄuroviÄ.

Film “The Man Who Defended Gavrilo Princip” was shown for the first time last night in the Republic of Srpska, and AndriÄgrad got an exclusive right to play this movie, which will be on the cinemaâs repertoire until the 11. December at 8 pm.